Extracted from an article published on www.bbc.co.uk on 17 January 2018. To read the full article click here.

The below news article highlights the importance of regularly testing water systems, in order to prevent cases of the potentially deadly legionnaire’s disease.

‘A strain of legionella bacteria has been found in the plumbing system of a County Antrim nursing home. It was discovered at a Nursing Home in Larne in November.

The Regulation and Quality Improvement Authority (RQIA) said, that while the bacteria is present, there has not been an outbreak of legionnaire’s disease. The entire water system at the home is being replaced to address the issue. The home said the issue would be resolved in the coming weeks. The issue was discovered as part of routine assessments.

“The pipe work is to be upgraded and while that work is being done, we have cut off some of the mains water supply within the home,” she said.

“The safety and comfort of our residents is of paramount importance and will continue to be so.”

The RQIA said use of some taps in the home have been withdrawn and others restricted as a precaution. Tap filters and bottled water have also been provided to residents. The regulatory body has also notified the Health and Safety Executive.

The RQIA said: “In late November, RQIA was notified by a Nursing Home of an issue identified through the service’s water testing programme.

“RQIA advised the Health and Safety Executive of this issue, and we were assured by the measures proposed by the provider to address this, including major replumbing work.

“The safety and wellbeing of every patient at the Nursing Home is of paramount importance to RQIA, and we continue to monitor this service through our ongoing regulatory activities.” ‘

Legionella is a BIG risk for Nursing Homes

Protect yourself & your residents by using ZetaSafe

We understand the unique challenges faced by Nursing Homes and know how important it is for you to monitor and mitigate against the real risk of legionella.

The Health and Safety Executive (HSE) has prosecuted numerous Care Homes for failing to control the risk of legionella.

With ZetaSafe you will protect yourselves and your occupants, whilst adhering to HTM 04:01 and passing CQC audits. Get peace of mind today with ZetaSafe!

All workplaces have legal duties under the Health and Safety Executive’s publication of ‘The Control of Legionella bacteria in Water Systems – Approved Code of Practice and Guidance (ACoP L8)’ and Technical guidance HSG274. Statutory duties are placed on the duty holder (the person in control of the premises) who must appoint a ‘Responsible Person’ to manage the control of Legionella.

Industry best practice is to carry out a site specific Legionella Risk Assessment on all water systems and there is a duty to keep Monitoring data for five years.

ZetaSafe legionella software is perfectly placed to meet this requirement as complex or extensive estates can drown in the paperwork that is generated. It is even more challenging to spot trends and patterns with paper records which can diminish your ability to make the timely interventions to help minimise risks.

ZetaSafe makes all of your critical data easily accessible, so any issues can be corrected immediately helping to protect your residents, staff and reputation. 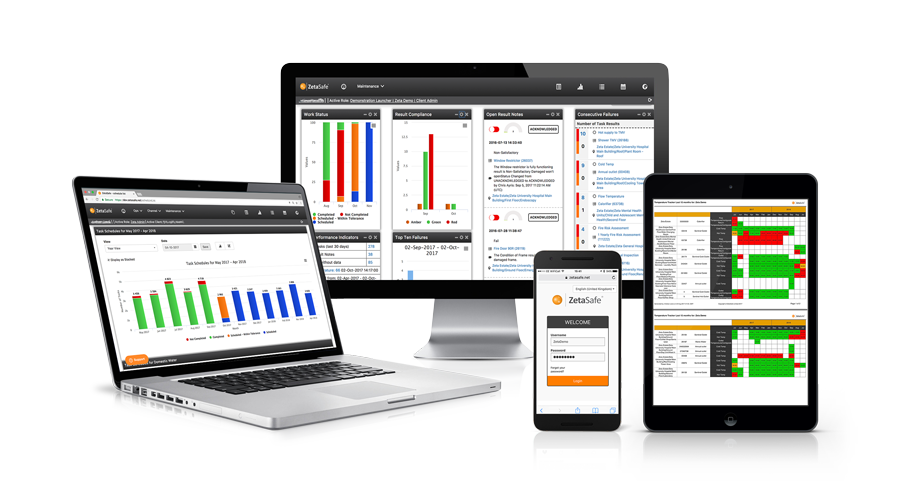 ZetaSafe can release your time and resources, allowing you to focus your attention on caring for your residents.

Get in touch today to protect your residents, staff and reputation.